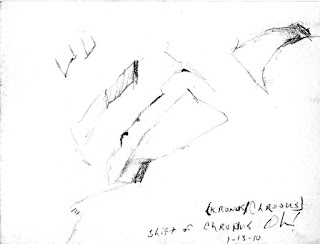 I think the title comes from a poem but I don't remember where. If I had my library of poetry books handy, I would be looking through one by a poet from Chile, but I don't, so I can't. That's the sorrow of it already. I had to look the word “regent” up again. From the dictionary: “A person who rules during the childhood, absence, or any unfitness of a rightful ruler.” But this isn't a person. This is art. Like the blues that flows from the lips of a singer lamenting the loss of a lover or a sharecropper who sinks into the tormented sobbing of knowing that insects have destroyed this year's crops, the pencil marks contain my sorrows. These sorrows are too great for one man to embrace, so I invest the powers of containment in an expression of pencil marks on paper. At the center of the field of whiteness resides the illusion of a landscape viewed from overhead, thrusting up out of an unknown body of waters. Or is it the image of the lower part of a heart suspended in raw air with marks around it as though to protect it from further harm? Yet the circle is open as the heart is open, in spite of this field of sorrows, like a regent who is only temporary at best, and perhaps self-serving with ulterior motives at worst. It is due to the lack of recourse otherwise that demands that a regent be named and trusted in spite of misgivings, that such matters arise.
I really like this drawing as it has incorporated some of the drawing techniques I enjoy doing. A sense of solidity dissolving into formlessness at center stage while other lines define boundaries in the flatness of the paper and other marks show the gesture of the hand in celebration of the dance. At the core of dance as a spiritual exercise is the awareness that everything we do is a dance. As my arm dances in space around me, the dance is recorded by way of the pencil grazing the surface of the paper and leaving a trail by which the dance is captured in visual space. Dance, by God! Yes! 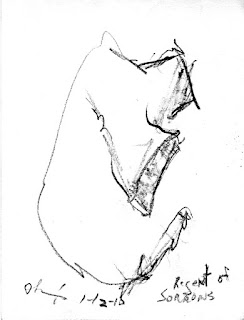 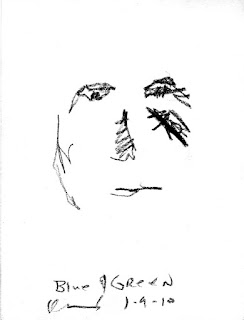 
I love walking during a snow storm. The snow absorbs all the sounds of the environment and renders the air around me silent. There is only the sound of snow falling on snow, like the sound of blood flowing through my ear drum when there are no other sounds. The landscape is blanketed with new fallen snow and rendered pure with whiteness. Nature has reduced everything to white in a sea of nothingness.
Walking along the city streets before doing this drawing, I'm also seeing a promise of something else. The snow blankets the landscape so the evidence of destruction to the natural world can't be seen. The snowy landscape holds a promise of sorts for me. I see into the future for a brief instant and know that time will fall upon this landscape like snow and remove all the markings of the Western Industrial Culture from the landscape. 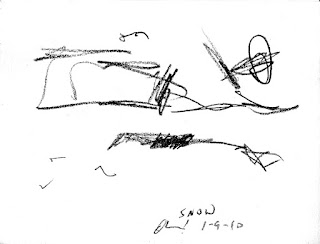 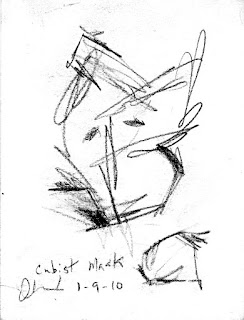