Those storms would roll through in the summer and rock the house and jar the windows. The best ones were to the north at night where I could lie in bed and look out my window. Dad always said that it was “going up the river” when they did that. This meant that they were going up the which combined with the near to become the . As a child I didn’t know what he meant. As an old man I still don’t know what it means for a storm to go up the river. It just went that way. I would lie at night and watch the storms. It was my favorite part of summer. Those storms would fill the sky with brilliant lightning flashes and the thunder would shatter the stillness of the night. I knew dad had been struck by lightning when he was a young boy. Later we talked and he would have been around fourteen years old when it happened. He always made it sound like he was ten or eleven. I didn’t fear the lightning even though I knew it could kill a person. It didn’t kill him so it didn’t always kill someone. At fourteen I started having dreams where I would fly up into the clouds and there were old men in the clouds that would talk to me and tell me things. It was always kind of funny at first. Other times I would have dreams and just fly around in the clouds and watch the energy buzzing about. I didn’t think a lot about the dreams. They were just dreams to me as a teenage boy.

I went off to college and started out studying physics but it was too boring and I knew I would never stay interested in my studies or work later, so I changed to art. Something in me knew already that I could do the same thing with color as a numeric value that I could do with mathematics so I kept exploring the ideas I had about the Universe and what made the world work the way it did and how to show these ideas through art. I wasn’t doing science fiction art or fantasy art and I wasn’t interested in doing “space art” for NASA. I just wanted to create visual images of energy. After I graduated from college in 1976, I had a very unusual experience that sent my life off in a whole new direction. I came to understand that I had a vision. This was after doing a fast from solid food for two weeks. I didn’t know that one could have visions. I didn’t know what a vision was. I thought I would go insane if I didn’t make sense out of this experience. I read a book about Rolling Thunder, a Cherokee medicine man who lived in . I thought he might be able to help me understand this experience. I started making plans to travel out to see him in late summer of 1977. Before I made the trip I was struck by lightning that summer. Actually it struck a metal fence about twenty feet away that I was starting to cross and I got the juice.

During the summer of 1976 I had started a painting. It didn’t seem to coalesce in my mind what I was trying to do with this painting. Over the years I would pull it out and work on it some more. Finally in 2006 I realized it was what the thunder clouds looked like from the inside during the dreams I’ve been having since I was fourteen years old. I completed the painting after a few more sessions. I never did talk to Rolling Thunder about that vision. It worked out the way it was supposed to. I’ve had other opportunities to talk to him over the years before he crossed over in 1997 but the vision wasn’t something he needed to help me with.

In March of 2008 I went to live with my father for 15 months until his health declined to the point where he needed to go to a nursing home. He had fallen a few times during the last month of so and I had reinjured my back when I picked him up. The back injury caused me to have muscle spasms during my sleep which threw my neck out. I got a pinched nerve that became inflamed. I spent June, July, and August with ice on my neck, wrote a novel, and went off on a tangent from my usual body of work with fractals. I called it the Cityscapes series. It was like looking down on a city from an airplane and seeing all the interconnected energies. I was evicted by order of court to relocate at the end of August, 2009. I had planned to have prints made of the fractals and sell them at some point. While working on “Energy Clouds” I thought about one of the fractals from the City series and looked at it. I started looking at all the fractals from that series and realized that most of them would work in the video as still images. Then I generated a video based on “City #7”. Using this video modified my original storyboard, as I wasn’t planning to use any fractal video in “Energy Clouds”. I’m including a short clip of the work in progress that includes this fractal video. I’m also including several images from the City Series.

Looking back on all the experiences, ideas, working to understand what is going on with my life, I see that the Cityscape series was important at the time as a creative outlet. I didn’t have any way to create art. I had no place to work. I had no materials. I had a computer and a program that would create fractal art. Even during great pain I would create art in whatever manner I had available. “Energy Clouds” isn’t about the pain or dislocation I’ve experienced through dreams or when I was struck by lightning. “Energy Clouds” is becoming a work that includes that as part of the human experience, but more importantly it is about the need to persevere even during great pain or confusion. There are good energies coming through at the same time and as long as I can tune into those energies and work on that, the creative process continues. There are good things that come forward that are of benefit to all human beings. The series of art works that have been created as part of this video are filled with the energy and vibrancy that I’ve experienced during the dreams. This isn’t abstract art from my reality. This is landscape paintings from inside thunder clouds. This is realism as best as I can depicted it with all the technical skills available to me through art, computer-generated fractals, voice, and a desire to understand more about the Universe. These are my quantum physics formulas in color. Oscillations happen. 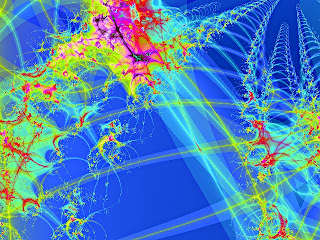 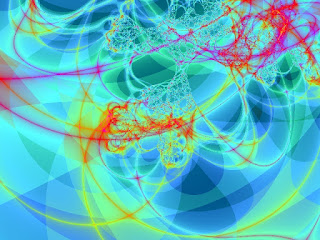 Posted by Olliver Loveday at 12:32 PM No comments: